Build your very own social robot

DIY kit lets you build your very own social robot 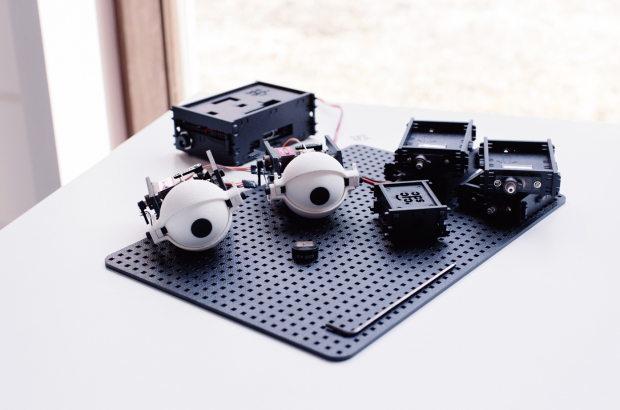 From Flanders Today: A project at Ghent University (UGent) makes it possible for anyone to create a robot capable of interacting with humans using speech and facial expressions. Opsoro, short for Open Platform for Social Robots, is planning to launch a start-up in the near future.

“Today, constructing social robots requires a lot of time and money, but we will provide an open-access option that will allow everyone to experiment with the technology,” says one of the founders, Jelle Saldien, a professor of engineering at UGent’s Kortrijk campus.

For his PhD at the Free University of Brussels (VUB), Saldien was involved in the development of the social robot Probo. A world-renowned “huggable robot” with bright green fur, Probocommunicates with children through speech, facial expressions and a video screen in its belly. The robot is used in studies that explore how humans, and especially children, interact with machines.

Opsoro isn’t available yet, but the robots are available for pre-order on the website, which also contains a step-by-step guide to putting them together.

There are three options: a starter kit with all the technology required to create a simple robot; an expansion pack with extra features like camera and motion sensors; and software to build your own robot from scratch. The last option is meant for people who know enough about the technology to create their own modules with 3D printing and laser cutting.

The starter kit and expansion pack come with cardboard exteriors to give the construct an appearance of a traditional robot or an owl, but users can easily change its looks by creating their own exteriors from paper or fabric. Saldien says putting the robot together is simple: “You could compare it to building with Lego.”

Programming the robot to speak or raise its eyebrows, for example, is also relatively easy thanks to the apps provided on the website. Before you put all the pieces together, you can first create the robot in an online simulator.

Saldien says they’ve tried to keep the prices low to reach as many people as possible. The starter kit costs €298, while the expansion pack is an additional €188. The basic kit for DIY users is only €68.

For a limited time, the website lets you try out the programming apps for free. “We work according to the open source model, meaning we invite all platform users to add features that can inspire others,” Saldien says. “We hope to establish a global network.”

Preparing for the future

The website also includes forums where users can exchange their experiences, making it easier to create robots for different targets groups, like children or professionals, explains Saldien. The platform already includes instructions on how to build the social robot Ono, intended for communicating with children. Ono is being developed by UGent researcher Cesar Vandevelde.

According to Saldien, the social robot technology can be very useful in the education sector. “It can help young people develop technical skills in playful and creative ways,” he says. “Robotics and artificial intelligence will become increasingly important in the future, so it’s also essential to provide youngsters with the necessary skills and show them the possible applications in a positive way.”

By giving young people access to a platform where they can experiment with the technology, Saldien hopes they will discover the robots’ practical applications and not see them as complicated consumer products that can only be developed by large corporations. “The social robots’ ability to communicate with us also makes the technology seem more ‘human’,” he adds.

The use of social robots has already been tested in therapy setting. The robots can, for example, help psychologists teach autistic children about emotions and social skills, such as greetings and facial expressions, or aid speech therapists in stimulating language development.

“Through our platform, therapists can share experiences with colleagues to spread information about how useful social robots can be,” says Saldien.

The robots, he continues, can also reduce the workload among hospital staff by responding to patients’ basic questions, like telling them what’s on the menu. “Companies have also shown interest. They could use social robots as receptionists, for example.”

Opsoro’s aim now is to create a start-up to manage the platform and begin production. The team was planning to launch a crowdfunding campaign, but it’s been put on hold. Saldien: “Right now we’re focusing on expanding the community and matching the kits to people’s needs through workshops and other initiatives.”