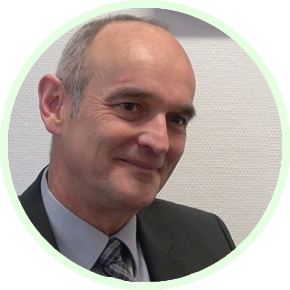 1957: Georges Bingen is born in Luxembourg.

1981-1985: Research Fellow at the Free University of Brussels (UBL) and at the European Commission's Joint Research Centre in Italy.

1986: Consultant for the Directorate-General for Energy, European Commission.

1987-1994: Economic Advisor in the Central Statistical and Economic Study Department at the Ministry of Economic Affairs, Luxembourg.

2004-2010: Head of Unit for Strategy and Policy (Human factor, mobility and Marie Curie Activities) at Directorate-General for Research, European Commission.

2010-2011: Head of the “People” Programme unit at Directorate-General for Education and Culture, European Commission.

Since 2011: Head of the European Commission Representation in Luxembourg.

1. The Marie Curie Actions (MCA) will soon be 20 years old and there are some 70 000 fellows so far. You were scientific officer at the time of the MCA launch, and later involved in their management for many years as Head of unit. How do you see their evolution?

Marie Curie Actions have come a long way since initially starting as an opportunity for researchers to go abroad. Over time, mobility has become more and more systemic and now, it is part of a “typical” researcher’s career.

Marie Curie Actions originally focused on individual fellowships and then became more oriented towards structured training and hosting fellowships. The latest evolution is COFUND, which looks for partners, funding, and partnerships with national programmes, with the sole aim of creating a bigger impact. It has become the usual path to a fellowship and to becoming internationally involved in research in this way.

2. You were involved in European charter for Researchers and the Code of conduct for recruitment (published in 2005). What was the purpose behind this initiative?

The Researchers’ charter was a very important initiative at that time as researchers were often underpaid, under valuated, and had no systematic consistent career perspectives.

So the purpose was therefore to allow researchers better working conditions and to follow a relevant career pattern. It was also intended to make researchers aware of their responsibilities, such as ethics, publications, and transfer of knowledge. There was a code of conduct for the recruitment of researchers, which required organisations to act fairly.

Furthermore, all institutions had to sign up and commit to better working conditions for researchers. Since then a lot has changed for the better, as far as I can see. Nowadays, researchers’ organisations know they need to be attractive and to offer better conditions. The initiative of the Charter and the Code contributed to that and subsequently continues to do so.

3. From 2010 to 2011, you were Head of the “People” Programme unit at the Directorate-General for Education and Culture. The Programme sought to develop human resources for research. Can you tell us more about the move from DG Research to DG EAC? How were Marie Curie Actions reorganised?

This move was strictly a matter of administrative arrangement and had absolutely no impact. It was just a choice to bring Marie Curie Actions to DG EAC because most of the mobility actions are run by it (the Erasmus Programme, for example). But the Horizon 2020 programme (and previously the Seventh Framework Programme (FP7)) is run by seven or eight DGs. So it was not natural for Education and Culture to not have a Programme in research; DG education and culture is responsible for universities, which represent 40% of research contractors.

4. How do you expect the new Programme Horizon 2020 and the new Marie Skłodowska-Curie Actions to help better researchers’ working conditions?

The new Framework Programme Horizon 2020 is focused on innovation and growth, which can be considered as key. Fundamental research is also important under this Programme. Horizon 2020 has managed to increase its budget compared to before. The Marie Skłodowska-Curie Actions have been simplified to correspond better to different types of needs (for early-stage researchers, experienced researchers, etc.). However, difficulties remain at a European level, which cannot cover all the needs. The national levels also have a role to play for researchers, and are encouraged by COFUND. I would add that moving in this direction would be a good strategic move in the long run.

5. How important are public-private partnerships in research under Horizon 2020?

It is clear the private sector has to be involved in innovation. Public-private partnerships are substantial and important in contributing to research dynamism. Mobility between the private and public sector has already been encouraged in the past, in fact even more now. I need only to refer to industry-academia partnerships to give an example of successful collaboration. These partnerships are a priority.

6. Do you have some tips for researchers who would like to apply for a fellowship under the new Horizon 2020 programme? On which aspects should they focus to be successful?

For individuals, my recommendation has always been “Try a European fellowship, they expand your experience and they are really valuable in a CV”. I think they offer a high level fellowship.

My second recommendation would be “Invest in your project and in your proposal”. Even if an applicant ranks among the best, this involvement is necessary to encourage evaluators to select a project over others.

I would add “Get help from experienced people for your proposal” and above all “Don’t give up!” I would give the same piece of advice to institutions wanting to apply.

7. Having worked yourself on the creation of the Marie Curie Alumni Association back in 2011, can you tell us about the European Commission’s expectations at that time? What should the Board do to optimise the role of the Association?

The Association was a long-term ambition. Researchers are funded under a significant, ambitious programme to get mobility experience. During their Marie Curie fellowship, they get high-level training at the best institutions, and are considered as the best people in research. But when this experience is over, there is no follow-up, no networking, and no more benefits. The best way we imagined a follow up was to create an Association of Alumni which would not only generate additional services, but also networking potential. The purpose was to create an association which would allow the Alumni to continue working together. Now the Association is operational, it is an excellent tool and I hope that it will meet this ambition.

8. What would you advise Marie Curie Alumni to do to improve professional collaboration between them?

Networking has always been important…but now it has become even more important. Look at professional social networks! They hold the keys for jobs and careers. Beyond this, the Association will allow Alumni to collaborate across disciplines. These cross-sector collaborations represent huge potential for Alumni, as does international networking.

9. How do you believe communication between National Contact Points (NCP) and Fellows can be made as effective as possible?

It is a very interesting point, and I must admit that we have not thought too much about the role that National Contact Points could play. NCPs have as their main mission to help applicants. But it is also true that the NCPs are taking on new roles – and they are encouraged to do so. We have in the past helped NCPs to build a network on their own. NCPs are trained and they meet regularly with DG EAC (once or twice a year).

After their fellowships, there was no contact between Fellows because they were not linked. There was no database. A meeting between ex-Marie Curie Action beneficiaries was consequently not possible.

I think that NCPs can play an interesting extended role, but we need to be aware that NCPs have a mission established under Horizon 2020, which is to support applicants. There could be additional support from the Commission. But in this case, it should be recognised as an extra. As a good starting point, a discussion could be held by Alumni at a local level on how to interact with NCPs as efficiently as possible.

10. Since the launch of the Marie Curie Alumni Association web-portal in summer 2013, have you consulted it? What remarks or suggestions do you have for the Association?

I have consulted it and it provides relevant services. I think that the relationship with the European Union should be more visible on the website, as it represents a key value of the Marie Curie Fellowships and Actions. I strongly encourage Fellows and Alumni to take the European level into consideration as it can offer them the opportunity to play a more important role. There is a consensus that innovation and research are crucial for the EU and I also believe that the “European spirit” has to be promoted among Alumni.

I understand that it is a website dedicated to Alumni. In this regard, it should protect Alumni’s data, as a protected area will encourage more information exchanges. This is a sensitive issue and it is important to ensure Alumni have a secure space.

In the past, some countries in Europe set up an internal database of researchers so as to help them establish contacts. I hope that the website’s Alumni database will contain advanced research criteria to facilitate contacts between them – especially in the framework of cross-sector collaborations. This represents an added value and I also hope that this database will be one of the website’s greatest achievements.

On this basis, events should also be organised. The Association should have at least an annual event with the Board and other members.

11. What would you advise Alumni regarding the creation of chapters?

Fellows and Alumni need to know that they exist. In this regard, NCPs can play a role in helping the Association organise meetings and events. For exemple, there are a lot of Fellows in Luxembourg working, thanks to co-funded programmes, who usually organise an annual event. Once created, Chapters could also organise this kind of event on an annual basis. Any event is possible thanks to an efficient database. Campaigns are needed to encourage people to register and to participate in the Association’s activities.

12. What in your eyes is the future for the profession of ‘researcher’ in Europe?

I would say that the last few years have showed the weakness of Europe in a globalised world. There was a recession for five or six years, which meant limited growth here and advancement in other parts of the world.

It is recognised broadly in Europe that only innovation can help to sustain a high standard of living in comparison to other parts of the world. It is more and more important that people get high level jobs, to generate added value and innovation in Europe, otherwise Europe will gradually be behind compared to the rest of the world. Research is therefore becoming more and more important and all governments have recognised that it represents added value compared to 10 years ago. Competition also needs to be taken into account as other parts of the world, such as Asia, are indeed very productive in research. So research will show the dynamics of future generations.